Santorini belongs to the island complex of Cyclades in the Aegean Sea. The name “Santorini” is derived from “Santa Irene”. There are quite a few legends about Santorini, one of them claiming that this was the location of the Lost City of Atlantis.

Originally, the island was round in shape and hence its name was “Strogili”, which means round in Greek. A big earthquake in the late 18th c.-beginning of 17th c.  B.C. wiped out the then important port city of Akrotiri.

The morphology of the island as we know it today was the result of the big volcanic eruption around 1600 B.C., which just left three pieces of land: The Caldera, Nea Kameni and Thirasia. From then on, Santorini was inhabited by Phoenicians, Lacedaemonians, Ptolemies and experienced periods of great prosperity during the Byzantine times and the Ottoman occupation, while it suffered during the rivalries between the Latin conquerors and pirates in the early 13th century. 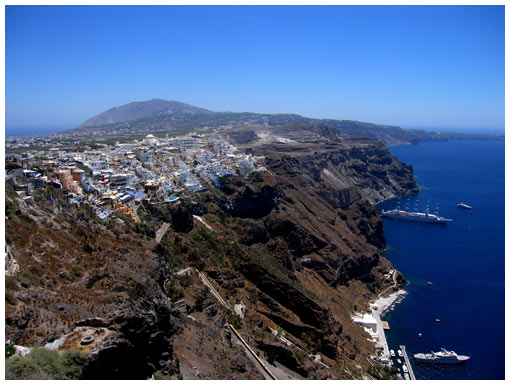 Santorini joined the Greek state in 1830 and continued to prosper until the earthquake of 1956.  However, Santorini started prospering again with the development of the tourism industry during the late 1970s. Santorini has a strong tradition in wine making, at least 3,500 years long. The climate of the island in combination with the type of soil found here, make the local grape varieties unique and they produce wines with unique character.

The oldest vineyard on the island goes back to prehistoric times. The main grape varieties grown here are the ‘Asirtiko’, ‘Athiri’ and ‘Aidani’, which produce white wine, while ‘Mandilaria’, ‘Mavrotragano’ and ‘Voudomato’ produce red wines. Santorinian wines are known for their intensity of colour and flavour as well as their high alcohol volume. There are a lot of different types of wine produced here and three of them have been awarded Protected Designation of Origin. The ‘Asirtiko’ wine is produced from the grape variety of the same name which is thriving on the island and gives 80% of the total wine production.

This is a complex wine, which combines all the flavours and colours of the island. ‘Neehteri’ is a mature wine and it is said that all the processes for its making were taking place only during the night, hence its name (‘Neehta’ is ‘Night’ in Greek). Vinsanto, i.e. ‘Vino di Santorini’, is the traditional fortified wine of the island and it is well known worldwide. Its intensity of flavour is due to the sundried grapes used to make it.

Santorini is characterised by great geological variability with white, black and red beaches with volcanic sand, rocks of different strata and colours and of course the spectacular Caldera. Santorini is a great holiday destination because it combines natural beauty, good food, history, relaxation, night life and a choice of activities. It is well catered for tourism with a wide range of accommodation and restaurants for all price ranges, cafes and bars. Car and motorbike rental is widely available but there is also a good public transportation system.  There are also some great beaches in Santorini where you can enjoy swimming and simply relaxing under the sun. Click here for information on the weather on some of the islands beaches.

You can fly from Europe to Santorini directly or via Athens (El. Venizelos airport). In case of the latter, you can then continue your journey to Santorini by plane or boat (5-7 hours from Piraeus). Holiday packages are provided by most tour operators.